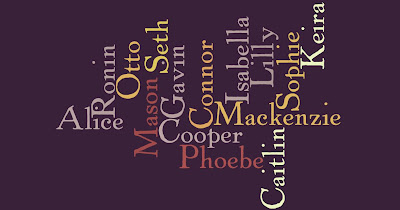 Choosing a pen name is often a choice dictated by a variety of factors, but like most decisions that deal with building a platform and a brand, it's not only personal but business.

With the decision made to choose a pen name, I quickly came up with a checklist.
Whatever name you choose, I highly recommend using it for your Twitter account (both the user name and the @name), because each tweet gives that name another hit on google.  This means that before long, when someone googles your pen name, they will get you, or one of your tweets.  This will of course lead to your Twitter account which should also have a link to your website, making it fairly simple for any readers to find you.

My favorite place to look for names is, hands down the Baby Names section on Parent's Connect (though the recent addition of video to the site is making me crazy).  They offer a cool feature that allows you to find names with a similar feel to a particular name, or names that sound similar.  This becomes useful if you really like a name but can't use it because it has high hits on google, or doesn't meet one of the other criteria.  Now you can easily find a different one that "feels" the same.

I hope this list will help, if you're considering pen names.  Have you already chosen a pen name or plan on using one?  What were your criteria?
Posted by Cali MacKay at 10:20 AM

Great post. This information on google hits is very helpful.

Thanks, Jennifer. I think starting with a name that has low hits on google is key to being able to "own" that name. Makes it much easier to dominate it, so you're at the top of every search.

I already use two pen names on my blog and on facebook.

My facebook name came from my family history as the name was a 3x great aunt who died very young and I wanted to give her a new life. My blog name is a name from the book I'm writing at the moment.

Jarmara, I love the idea of using a family name! It's a great way to pay honor and also get a name that has personal meaning.

Like Jarmara I took family names and combined them to make a pen name. I knew next to nothing about it when I started - but I did google the name in quotes (probably thanks to your suggestion!) and got zero hits at the time. I'm playing around in a bunch of genres right now so I hope the name will match well enough if I ever get to the next step!! :)

Jemi, it's a great name and I think it's also very adaptable to a variety of genres. Excellent also that it didn't have any hits on google!

In my case, my first name was fairly common, with professional American and Austrialian football players owning it too, not to mention a conservative British politician and a gay detective in some author's series of novels. None of which match my heterosexual, politically moderate baseball-playing self. But I decided to go with my initials on my manuscripts, which was far less common. Great tips, Cali!

Awesome post. I've never used a pen name, but I'm not ruling it out.

Thanks, Medeia! Maybe if you start writing a different genre and want to keep things seperate? It's always a great option.

You have a fabulous blog! I’m an author and illustrator and I made some awards to give to fellow bloggers whose sites I enjoy. I want to award you with the Best of Romance Blog Award for all the hard work you do!

I invite you to follow me, if you haven’t already done so, since we have a lot in common, but no pressure. I’m not giving you the award just so you will follow me. You really do deserve it!
Take care:-)


Go to http://astorybookworld.blogspot.com/p/awards.html and pick up your award.
~Deirdra

Deirdra, thanks so much for the award. I'm glad you like my blog, and I'm happy to follow yours-- you've got some great info! Thanks again!

Matt, my apologies that your comment got lost in moderation.

Love all diversity of people that have the same name as you! Glad you were able to use your initials with little problem, though. : )

Like Inception, or The Tree of Life or Moon.

Or am i just not understanding that even writing 'unconventional' sf & f stills needs a 'name', like say T.B. Parks?

Thank you for any advice.

Teal, I do think it'd be rather unconventional, even for speculative fiction. My concern would be that it might confuse the reader and make them feel a disconnect from you as the author. If it's something you want to do though, maybe give it a try with a sort story or two first and see how it's received.

I have two pen names. One started as a fluke to protect me from myself when I stepped out of the proverbial writing closet and used the first initials of my first three kids' names and the middle name (maternal grandmother's maiden name) of my last.

Cat Woods. Easy to remember. Easy to spell. Unfortunately, it's also quite popular as a wood, etc.

I may or may not use my second pen name for my older age groups of juvie lit to protect my younger readers from content that is too mature. Fortunately for me, that name pops up first and only in searches. I've already secured blogger, wordpress, my dotcom and twitter with it. It also uses variations of my four kids' names.

I did this because I love being connected to my children and the name combo is actually quite beautiful when put together. Some of my adult articles have been pubbed using a variation of this name already.

Cat, I absolutely love the idea of combining your kids' names. And even better that it has low hits. Smart of you to secure things while you can. : )

People have a hardere time pronouncing my real name right, so I've been using my childhood nickname(Cherie). I'm fine with it, but I don't know if I should also use a different last name? Hm. Definitely something to think about.

Cherie, I totally understand having a name that's difficult to pronounce. My maiden name got massacred. lol. At least Cherie is easy to remember and say, and isn't all that common. : )