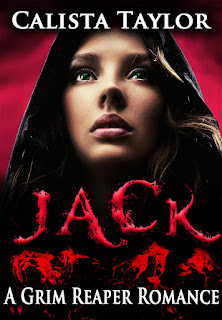 I'm happy to say, JACK is now available on Amazon and Barnes & Noble!  With Jack the Ripper as a grim reaper who's gone rogue, I hope JACK offers a unique take on the murders.

I know it probably seems odd to combine a romance with the Jack the Ripper mystery and murders, but the story primarily focuses on the romance between the two reapers searching for Jack, while the murders serve as more of a backdrop-- and yet, not all is as it seems.  Though this is a story about one of the most famous serial killers, I promise it's not a gore-fest.

There were some great sites out there that chronicled the Jack the Ripper murders, but most indispensable was Casebook: Jack the Ripper.  There was also great info at Jack-the-Ripper.org and the Metropolitan Police site.

I love your spin on the story. I think it is really unique. I've only read bits here and there. I can't wait to be able to read the whole thing. (Litgal and Spring Fevers is still in my TBR pile so it might take me a bit to get to it.) :( Too many books is a nice problem to have though!

Thanks, Jean!! I totally have the same problem-- it's either write or read, and my TBR pile is huge! I hope you'll enjoy Jack when you do get to it. : )

My Kindle is exploding with all the stories too!

Can't wait to get to Jack!! Such a great twist on the story :)

Thanks, Jemi! I hope you'll enjoy it. Now if only we could get a few more weekends in the week! ; )

Getting closer to it in my TBR pile!!

By the way, I gave you a shoutout on my blog today while talking about Giver's Gain. :D

Thanks for the shout out, Jean!! You're too sweet! Can't wait for you to start reading Jack! : )

Sounds like an awesome spin on an old tale. Great job.

Thanks, Ciara! It was a lot of fun to take Jack the Ripper in a different direction.

Nice, Sharon!! I hope you'll enjoy both Jack and your Nook!!

Okay, that was two, but I loved the unique world of Jack, so I got a bit excited and couldn't help myself!

Congrats, Cali, and best luck. You're making waves, my dear.

You're too sweet and kind, Cat!! Thank you so much!!

I love the Casebook: Jack the Ripper site! (Too bad there are so many dicks on the forums, though.)

Min, sorry to hear about the forum. Haven't ventured there yet. Now you have me curious. lol.