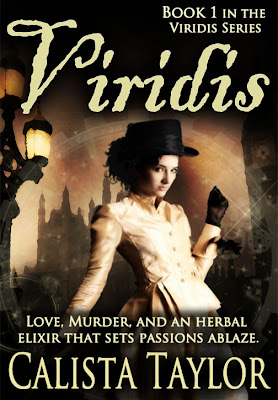 I'm still planning on e-publishing Viridis in the upcoming weeks, but wanted to give you a sneak peek.  Above is also the final cover.   It feels like this has been a long journey, and I'll admit, I'm a bit nervous to take this next step.  Can't move forward though if you're not willing to take a risk.  I do hope you'll enjoy.


The body lay as it had fallen, the man’s limbs bent at awkward angles.  Holding the lantern out to shed light onto the scene, Inspector William Thomas crouched down, careful to avoid the pool of blood that had frozen onto the cobbles.  Shifting the body over, he made note that the blood beneath had not yet had a chance to ice.  The man couldn’t have been dead more than a few hours.  Any longer, and he’d have been stripped of any valuables, the harsh cold being the only thing to keep the street urchins at bay thus far.
Looking around the dark alley, there was little evidence to be had, other than the body itself.  No signs that a struggle had ensued.  Nothing left behind.  It must have been done quick and with surprise, since a young man like this would be apt to put up a fight.
Even through the dim flickering lantern light, William was able to identify the killing blow as having come from a fuse gun, the burn in the fabric and the hole of singed flesh all the evidence he needed.  At least his death would have come quick, a small mercy.
The man’s face had frozen into one of shock.  It was still a beautiful face even in death, framed by locks of gold, youthful, with a strong jaw.
Someone would be missing this man come morning.  By the cut and quality of the cloth he wore, it was certain this was a man of wealth.  The poor went missing and dead too often for most to notice or care.  It was a cruel injustice, but that did not change the reality of the matter.
“Do we have any identification?”  William turned to the constable who had found the body during his rounds.
“That we do, Inspector, and it’s not likely you’re going to have an easy night of it.  According to the calling card found on his person, this is Lord Niles Hawthorne.”  The constable handed it to him.
“A bit out of his way to be wandering into this part of town.  More than likely he’d been over to Viridis.  No other reason to be in this part of the city.”
Viridis was a dinner theatre and club offering a drink by the same name.  Lady Phoebe Hughes had developed the strong distillation from a variety of plant essences, and as of late, more and more of London’s elite were turning to the newly developed herbal for refreshment and escape.  Viridis offered all the best traits of intoxication—and then some— with none of the undesirable side effects.  Indeed, the club Viridis had been designed with London’s elite in mind, offering them not only a fashionable and entertaining destination, but also one that managed to retain a sense of respectability and decorum, despite the nature of the herbal, which once consumed, was rumored to have the effect of an aphrodisiac.
William could see the attraction.  Physically, the herbal did not make one susceptible to dependency.  However, that was not to say one did not develop a mental predilection for the euphoria and heightened senses it brought on, both mentally and physically.  And it was the physical effect of the drink that attracted so many followers. It was rumored that when Viridis was taken in its undiluted form, an orgasm could be brought on by a single kiss.
With so many of influence frequenting the club, the local authorities had been willing to overlook its rather salacious, yet tasteful reputation, but with a murder only blocks from Viridis’ doorsteps, William would need to take a much closer look at the club and its proprietress.
It was high time William paid Lady Phoebe Hughes a visit.